This film was made on location at the three top ends of Australia from June through August 1977. It attempts to explain & portray our environmental sculptures in the outback regions where the indigenous materials, methods and people play a direct part in the resultant visual object. 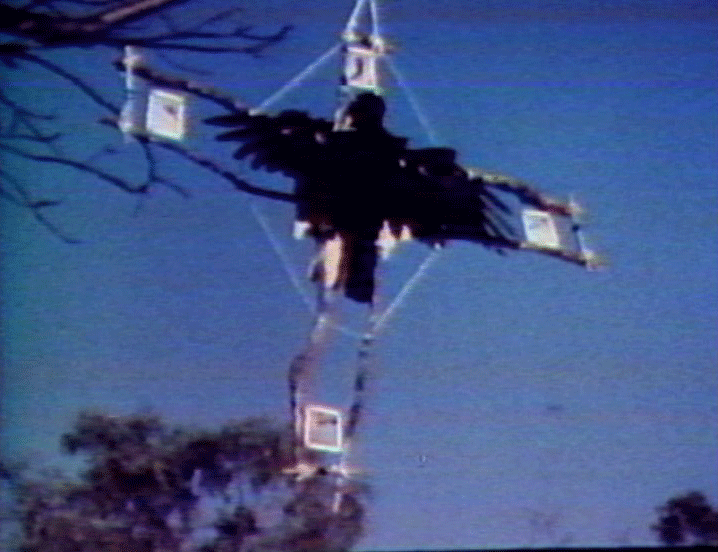 This video is a documentation of works that were built during the environmental art project involving the people and the ecology of the northern outback regions of Australia. It has been edited from film material shot in three bush galleries and shows, through diagrams and Super-8 footage, the series of small sculptural installations that were assembled at these sites by Grounds, Pholeros and their students. They are made from locally available materials and reflect on natural processes. At one ‘gallery’ site these range from the erasure of a work drawn in sand over the period from dawn to dusk, to portraits of the effects of man’s impact on the environment, to a camera hanging from a rotating mobile focussed on a set of found objects (feathers, bone, an aeroplane wing) also hanging from the mobile, to a water cycle piece in which the sun evaporates a bowl of water that is then re-condensed to attempt to grow some seeds. At another site the projects included a visit to a cattle station to make a work on a paperbark tree, to work with the manager of the station and with the physical and social environment of termite mounds, which they tried to improve on, but which were not accepted by the termites. At the third site they made a large fire sculpture echoing the indigenous use of fire to control the ecology. All the works are indicators of process, time and the role of the sun as the source of energy.

Sculpture at the Top Ends was exhibited at the Seventh Sculpture Triennial, Mildura (1978) along with photographs by Pholeros and Grounds. Grounds also produced another work for this event: Suntrack 3, (1978) which he describes as “Consisting of a large impermanent environmental piece dealing with energy systems. The title is literal it would consist of tracking the sun (physically with instruments) and recording a series of related events during that tracking period”. 1

A book was also published: